Previous Next
Conducting laboratory tests for efficacy of a UV disinfection system that uses ultraviolet light to destroy the DNA of microorganisms in water, rendering the water sterile designed by MIT graduate student Adekunle Oyewole.

According to USAID, only 30 percent of the population in Nigeria has access to safe drinking water and adequate sanitation which in turn contributes to waterborne diseases and other sanitation related diseases such as cholera or typhoid. This problem is even worse in Lagos, where as of 2016, only 10% of the population have a treated water supply and the other 90% rely on street vendors or groundwater. A preliminary assessment of water quality in Ilorin, Nigeria was performed in December 2020-January 2021 by Adekunle Oyewole.

While many households do have off-the-shelf water purification systems, this assessment identified the presence of total coliform in 76% of samples and E. coli in 35% of samples, indicating insufficient disinfection of the water. A study of drinking water conducted across Ekiti State, Nigeria, similarly found that 73.6% of samples did not meet the World Health  Organization’s standards for microbial water quality (Olowe et al., 2015).

This project aims to improve water quality for Sub-Saharan Africa, starting with Nigeria, through a reliable UV filtration system. UV sterilization systems are water conesrvative, require no chemicals, have relatively low maintenance needs, can have low power consumption and be operated off solar, and achieve highly effective, nearly instantaneous disinfection at the access point. Due to their ability to damage nucleic acids they have been shown to be effective at the inactivation of a wide range of pathogens, ranging from bacteria, molds, and viruses. The intended users of this product are middle class households living in Lagos. Many families who can afford to in Lagos spend approximately $2,000 - $5,000 per year on water treatment already but water treatment devices are poorly maintained and are not as effective as they can be. Over the semester, we determined the effectiveness and operational limits of current prototypes by conducting lab tests at the D-Lab Water Lab, and studied the known failure modes of UV disinfection systems to suggest improvements for the next stage of prototyping.

Testing operational limits of the prototype

The two key operational parameters under consideration are flow rate and influent water quality; the efficacy of purification will be quantified through total coliform and E. coli counts. These parameters will be evaluated through the use of Colilert tests. Influent water quality will be varied both by utilizing environmental sources of varying quality and by artificially changing relevant parameters. The most critical parameters under consideration are turbidity, total dissolved solids, water hardness, water color, iron and manganese concentrations, and initial bacterial load. 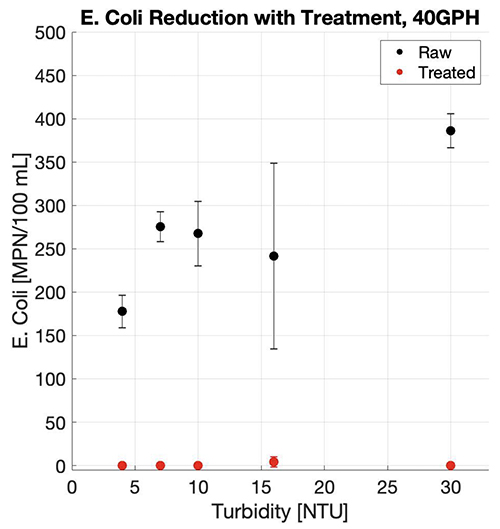 Lab tests have been completed to test the efficacy of the 40 GPH prototype in the 0-35 NTU turbidity range, which completely eliminated both coliform and E. Coli. Hardness ranged from 25-50 mg as CaCO3, and Total Dissolved Solids were approximately constant between 500-510 ppm. This prototype is operating well outside of the recommended limits of 10 ppm TDS and 5 NTU. While other tests have been performed, they have ultimately been inconclusive due to insufficient bacteria in the raw sample.