Mali spiraled into a political crisis after the government was overthrown in March 2012. Due to the ongoing conflict in northern Mali between the government, Tuareg rebels, and Islamist groups, there is widespread poverty, an agricultural economy vulnerable to droughts, limited government service capacity, and insufficient infrastructure.

Since 2012, Mercy Corps has been working to empower Malian communities to cope with and recover from resource scarcity, particularly in fragile conflict-affected areas. MIT D-Lab's Energy team is working with Mercy Corps to identify opportunities for programs to sustainably increase energy access.

In October and November of 2015 Mercy Corp's team in Mali conducted a three-week energy needs and market opportunity assessment with support from D-Lab's Off-Grid Energy Group. The team visited 30 towns and villages across three regions in Mali, gathering information about current energy access, aspirational energy needs, private sector infrastructure, as well as government and nongovernmental programs that are active in the sector. For more information on the assessment process read Eric Verploegen's blog post Energy Assessment in Mali.

Solar power is the preferred source of electricity in off-grid villages, and solar panels were available at shops in most major. Many households have systems that provide basic lighting and phone charging, but in almost all cases there are issues with improper installation of the systems, leading to significant inefficiencies and decreased battery life. The team found that while some residents of Mopti and Tombouctou had access to electricity and solar panels, it was generally less accessible than in Segou.

In Segou, Mopti, and Tombouctou, wood and three-stone fires are overwhelmingly the most common form of cooking, and in Mopti and Segou some people use permanent mud stoves.  Firewood is scarce forcing women often spend over 10 hours per week collecting firewood for cooking fuel. Deforestation of great concern, particularly in the northernmost regions, and in more urban areas near Tombouctou there is significant presence of charcoal imported from other regions. Most cooking is done outdoors which reduces the health concerns related to cooking with biomass fuels. There is significant awareness of efficient cookstove technology, however, there is no access to high-quality efficient cookstoves in the regions north of Bamako, the capital city.

We met with two cookstove manufacturers in the capital city, Bamako, and both are currently focusing their sales operations in the regions around Bamako. This presents a clear opportunity for Mercy Corps to develop programs to increase access to efficient cookstove technology. Mercy Corps has programs in entrepreneurship training and support, as well as microfinance programs that could be leveraged to help develop sustainable cookstove businesses.

Identifying approaches to increasing electricity access is a bit more complicated as there is significant availability of components for solar home systems in rural areas, but there isn't much in the way of quality standards for products or installation. Mercy Corps and D-Lab see an opportunity for developing programs to promote professionally installed community solar “micro-grids” (for villages on the size of 300-1,000 people), and for providing energy that can run equipment (such as solar water pumps, sewing machines, refrigerators, grain grinders, etc.) that can support economic development.

In January of 2016, Mercy Corps purchased 100 efficient cookstoves from Projects Solidaires Mali and transported them to Ansongo, a town in the Gao region of Mali. Mercy Corps' team conducted a demonstration of the efficient cookstoves to a group of 12 entrepreneurs who expressed interest in selling the stoves. Mercy Corps arranged a financing program to allow for the cost of the stove (~$20). All of the 100 stoves were sold within 2 weeks, and all of the customers repaid the cost of the stove over a period of four months. Mercy Corps is currently working with Projects Solidaires Mali to increase the scale of this program, and ultimately to setup a facility to locally manufacture efficient cookstove in the Gao or Tombouctou regions. Mercy Corps is also working with Total Mali to connect them with the same network of entrepreneurs to sell solar lighting products in northern Mali, where Total currently does not have a distribution network.

Learning from stakeholders: reflections from my summer as a Monitoring, Evaluation, and Learning Fellow

MIT D-Lab
Learning from stakeholders: reflections from my summer as a Monitoring, Evaluation, and Learning Fellow

The Off-Grid Fruit and Vegetable Refrigerator in Mali

Medium
The Off-Grid Fruit and Vegetable Refrigerator in Mali

Clay pot coolers for fruit and vegetable preservation in Mali 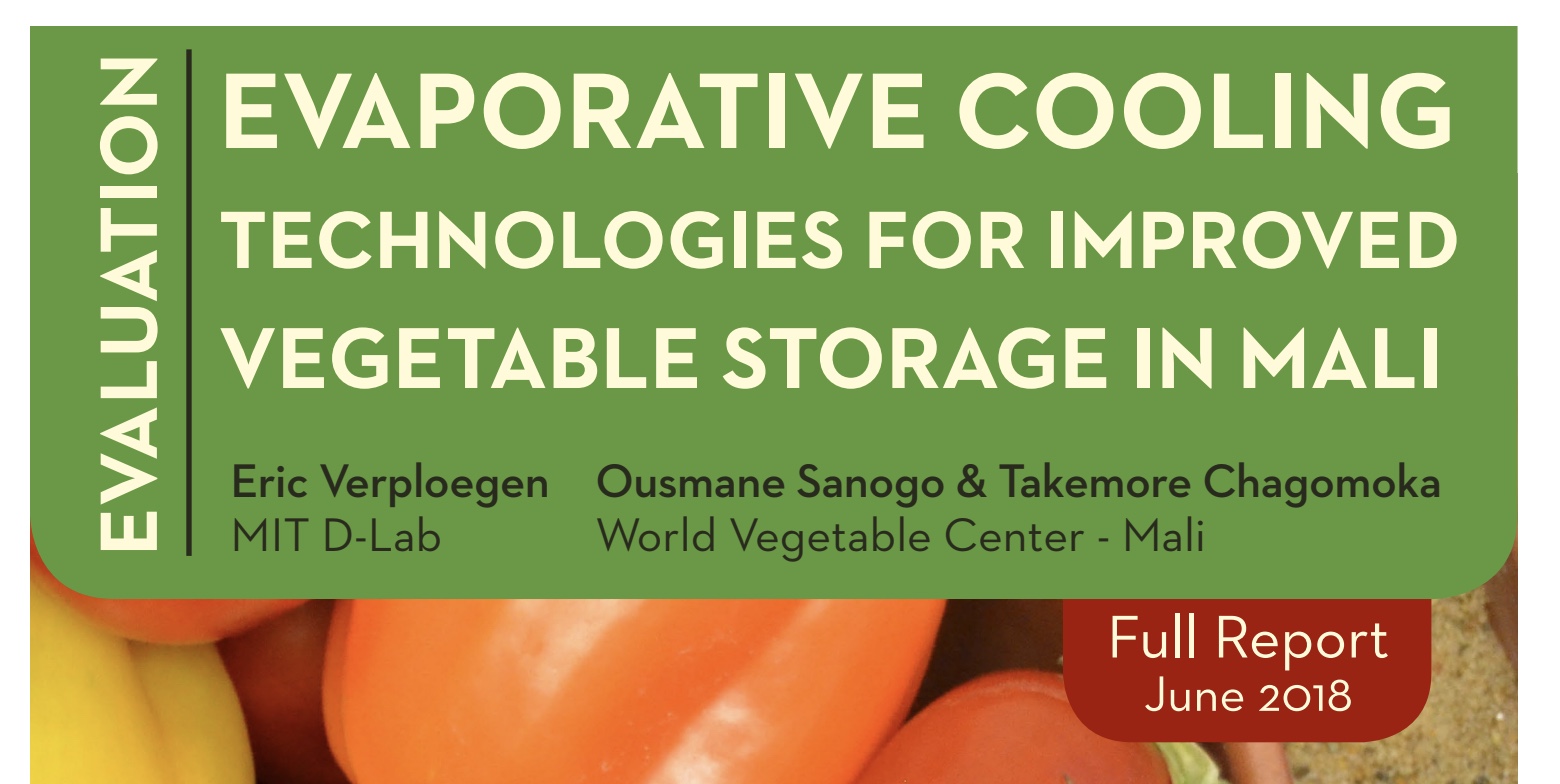